What’s the first thing that comes to your mind when you hear “Las Vegas”? The bright lights that dot the Strip? Britney Spears at Planet Hollywood? The clink of coins in the slot machines? 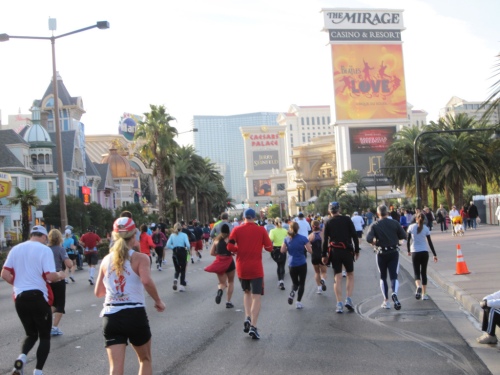 If you ask Josh Furlow, health and fitness should rank pretty high up on that list.

Furlow is the Senior VP of Operations of the Rock n’ Roll Marathon Series. Every time the series touches down in Las Vegas, it becomes the city’s biggest outdoor fitness event – the Rock n’ Roll Las Vegas Marathon. And in just a few short years, it and other events centered on fitness and health may well eclipse gaming as Las Vegas’ biggest allure.

The city’s gaming industry has reported big revenue losses for the sixth year running, according to CNN Money. The situation doesn’t look like that’s changing anytime soon, either, especially with online gaming companies gaining even more ground through lucrative jackpot games with a low barrier for entry.

With the gaming industry in the virtual dumps, large-scale events, conventions, trade shows, and expos have helped Las Vegas roar back from the economic downturn in recent years.

Not only is the Rock n’ Roll Las Vegas Marathon a big draw for health and fitness enthusiasts the world over, it has also helped stimulate the city’s economy. In 2014, for example, the Las Vegas Review-Journal reports that the event generated almost $85 million worth of direct spending.

The brains behind the marathon have also recognized a great opportunity to further capitalize on Las Vegas’ spot as the premiere convention destination in the United States. For the non-runners, they’ve also set up the Las Vegas Health and Fitness Expo. Both events will start on November 10th, 2016, with the marathon concluding on November 12th and the Expo closing its doors a day later.

Other health and fitness events have also recognized the opportunity for synergy. This year’s installment of Interbike, the biggest bicycle industry trade show in the US, for example, will start on September 21. On the same day, CrossVegas will kick off the year’s cyclocross World Cup season. One guess as to where both events are taking place.

With all of these events and more on Las Vegas’ calendar, the day may not be that far off when it becomes the next big health and fitness mecca in the US.

My Fitness Journey
The Skinny-Life
Confessions of a Mother Runner