I apologize but this post will be short and sweet again. Frankly, being born in Ukraine and having lived there a huge chunk of my life, I am super upset and concerned about what has been happening there over the past few months. I am supposed to go there in April and now I am not sure as to what is going to happen given the circumstances. I am really sorry to get it out in here, but I just can’t grasp how this can be happening… My brain can’t stop spinning… I am overwhelmed…

So to take my mind off this entire situation, I will share this amazing infographic on how to make a healthier salad. Yes, salad! Why not?! Haha!

I love this infographic particularly because I find that I normally stick to making the same salad over and over again and using this image I can already see multiple possibilities!

To burn some of my anger off *yes, anger and frustration over inability to do anything to help my friends and family back in Ukraine*, I chose the following cardio workout at home.

What are your favorite healthy salad dressings? How do you change it up once in a while?

7-Minute Workout That Will Keep You In Shape

On the days when the temperature drops to close to -30 (Celsius), it may be very difficult to convince yourself to go to the gym. It’s like, thanks, but no thanks! Also, with Christmas only a week away, everyone is busy doing last minute gift shopping. *Yup, I’m talking to YOU, procrastinator!* So whatever your reason may be, I wanted to share with you a workout I do on the days when I simply can’t make it *or don’t want to make it… Hey! I gotta be honest!* to the gym. Let me introduce you to a 7-minute workout. 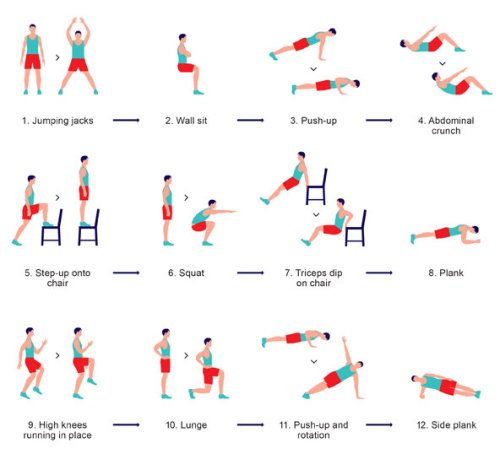 As the name implies, the workout lasts only 7 minutes. *Even a super lazy person will find it hard to refuse such a deal!* It was initially published in the American College of Sports Medicine’s Health & Fitness Journal and involves 12 exercises that have to be done in a rapid succession with 10-second breaks in between them. Each move has to be done for… wait for it… a GRAND total of 30 seconds! In a fancy fitness world, they call it High-Intensity Circuit Training; between us, simple people, all it is is an interval training, meaning that you have to put maximum effort into any given exercise and do as many reps as possible within a 30-second time frame. Sounds simple enough, right?!

Well, don’t be fooled by an apparent simplicity of this workout! Since it was invented by SMART people a.k.a. scientists, “even a few minutes of training at an intensity approaching your maximum capacity produces molecular changes within muscles comparable to those of several hours of running or bike riding.”; and that’s according to the New York Times. *WHOA!*

So don’t be shy, give it a try! And if you feel EXTRA frisky,go at least 2 or 3 times through the entire routine. Believe me, your body will be grateful, especially AFTER the holidays!

Now it’s your turn! What do you do to stay active when going to the gym is not that much of an appealing option?

My Fitness Journey
The Skinny-Life
Confessions of a Mother Runner

Make the most of every day